Where did Parra (Nicanor) and Parra (Manuel) meet?

I don't remember when I learnt about Nicanor. It seems like I've always known him. His anti-poetry was a staple, a thing that I took for granted, in a house filled with irreverence and politically inclined (leftist) Sunday conversations. What I do vividly remember though is that he showed up in our Spanish literature, ministry of education mandated, high school class' syllabus. I also will never forget my parents taking me to his 2001 exposition of 267 “artifacts” in the Telefónica building in downtown Santiago.

I first liked him because of his humor. His artifacts always had some kind of ironic (but also un-ironic) touch. However, as any good comedian does (not implying that he is one per se), behind the surface, he was helping us cope with realities that we didn't want or could not comprehend. His artifacts have always dealt with thorny subjects like capitalism, inequality, politics and religion. He rubbed loads of people the wrong way but that's who he was. Unapologetically, he was offered the exhibition space below La Moneda (Chile's seat of government) where he promptly hung by the noose figures of all past presidents of the country.

After being exposed to his art, I learnt some facts about his life. Born to the famously artistic Parra family – that I really badly want to confirm I'm related to but can't (believe me, we tried finding the records) –, he had 6 siblings. Five musicians (Violeta and Roberto some of the most famous Chilean folklore singers of all time) and a circus artist. The only one of his siblings to pursue high school and university studies, he graduated a math professor. He then won a scholarship and went to Brown University, USA, and got a masters degree in advance mechanics (physics). By that time, he had already written some poetry and won some local awards for it. A few years later, he left Chile again, this time for the UK, where he studied cosmology at Oxford. All in all, as part of his science career, he made critical contributions to the field of mechanics. On top of that his poetry was recognized by the biggest voices in Spanish literature and he was nominated for a Nobel Prize in several occasions. I was fascinated by the unorthodox path this man took; often wishing I had at least a small percentage of that style in me.

Parra and the absurd outcomes of the economy and politics

There are two pieces of bread. You eat two. I none. Average consumption: a bread per person.

Through this pandemic, we have been witnessing the absurdity of being punished by people who base their political/public policy decisions on a “philosophy of knowledge” v. a “philosophy of existence”. These political creatures that through their deductive thinking believe that they (1) can model the world into a specific shape and (2) that their way is better than any other way. We have forgotten that a more “platonic” outlook forgets how to deal with “rubber meets the road”. I'm not advocating for a “blind technocracy” but rather a more humane approach where (1) values act as the guiding principles they were meant to be and, (2) reality and infrastructure are the concrete bases for decisions.

It seems that this way of thinking permeates both sides of the political spectrum in Chile, leading to absurdist outcomes. For example, Government decides they are too orthodox to side with (the objectively very bad) 3rd withdrawal of individual pension funds to help people survive the quarantine. However, at the same time they decide to skimp on direct transfers to people, instead choosing public policies that look good on paper (“we are able to reach 80% of the most vulnerable population” kind of speech) but that in truth hide misery (because the amounts are laughable) and disrespect (because getting a gigantic red “x” displayed in your face when you are not elegible for governmental aid is not fun either if you are really struggling). This, of course, is in spite of direct transfers being one of the objectively best public policies in situations like these (praised by the economy Gods of the IMF and others, of course). This thinking has been said to permeate all the way from the “2nd floor” of La Moneda where some very neoliberal orthodox seem to be running the show. I want to believe that Parra would have definitely made an artifact out of this absurdity (see the first image in this post).

(Oh, and to my friends on the left: there are versions of this on your camp too. Like the hypocrisy of the Communist Party praising Stalin or Lenin and then being the highest advocates for Human Rights.)

What seems to be happening here is that we have forgotten what to make of complexity. Confronted with a million choices – as the election crawls closer – and their respective 2 square meter ballots, not even the population knows what to do. Mostly because the discourse around public policies like the 3rd pension withdrawal is totally “philosophy of knowledge” – where the realities of people don't matter. Most of the most vulnerable folks do not have money in their pension account to withdraw anyways and, this turns out to be one of the most regressive policies in a moment where solidarity and social security should be paramount. And instead, we have people blindly advocating for stuff that will make the country worse off.

One of the things that I have always liked is the idea of social security and sovereign investment funds. Tax where you need to tax to finance the overall wellbeing of the country and the redistribution/decentralisation to allow for as much freedom as possible. Make the State a force for good in terms of investments, good jobs and create reliable infrastructure that will last decades to come. Iterate on what is working/not working right now and take into account the multiplicity of realities hiding behind social media. Let's ride a “philosophy of existence” with some fundamental values (like solidarity/fraternity – yes, I'm talking to you deep pocketed millionaires) as guardrails and make some progress.

Some Parra for the pandemic 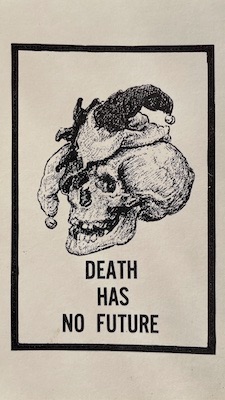 Stats versus people is a staple of this pandemic. The fascination with cases, infection rates, vaccination speed and others is incredible. In general, these stats/data bring little to no information to the average Joe (myself included) that has no clue what to make of them. In general, I choose to be hopeful and I'd like to believe that science is winning the battle against this virus. In spite of the outbursts of “anti-vax” or “anti-quarantine” movements.

However, my main reflection to day is that we never got time to grapple and grief. For a strange reason it seems like since the start of the pandemic we've been under a constant state of “compassion fatigue” due to data/news saturation (Sontag 2003). We tracked numbers but most of us didn't track the reality of death unless it came really close. That empty spot in the dining table or the cold side of the bed that because of Covid are never going back to normal. Have we desensitized ourselves to the power of listening to the stories ? I fear sometimes we might have collectively chosen data (our future overlord?) over humanity to convey messages that are intrinsically emotional. Not all of us need the stats, because we're not decision makers. Most of us need the stories though.

On top of it, the population's concentration span might be reducing considerably and the 140 characters on a twit that doesn't give enough context is what we might end up transmitting (or re-sharing?). In general, the fact that most visited media today is image based (incl. video) makes for a dire issue in these situations because the need for images means that detail and more complex ideas can be easily lost. (Michalski and Gow 2007: 218) However, some people are doing it right, using the medium to explain, in ways that are creative and close to the public some of the more complex mechanisms behind the vaccines, for example.

Today, I choose to remind myself that death has no future. This should be both a call to action and also a reminder that we need to look into the future after we've grappled with the losses. Collective trauma might be eased by celebration of those who passed but also by creating new and friendlier (both to the environment and to ourselves as humans) ways to live. We need to honor them, both taking care of ourselves and making it better.

Parra for the future

I think I've written enough incomplete thoughts for an entry. I hope this gives you all some idea of what I've been wrestling with lately.

I will leave you with one last artifact and let Nicanor do the talking. The beauty of poetry is that we can make it what we will. 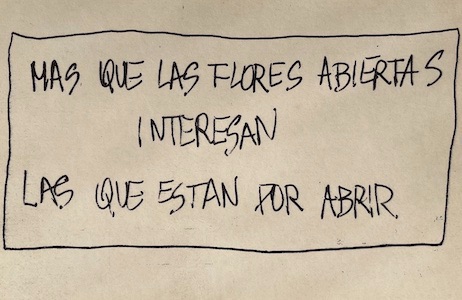 More than the already opened flowers, the ones of interest, are the ones that are about to open